Running in the wind - Millau bridge in Southern France

Millau Viaduct (French: Le Viaduc de Millau) is a cable-stayed bridge that spans the valley of the river Tarn near Millau in southern France. It is determined as one of the greatest engineering achievements of all the times and is known as "Structure that breaks all records".
Here are some of them detailed in the official website:

Designed by the French structural engineer Michel Virlogeux and British architect Norman Foster, it is the highest bridge in the world. It was formally inaugurated on 14 December 2004, and opened to traffic on 16 December. The Millau Viaduct is part of the A75-A71 autoroute axis from Paris to Béziers and Montpellier. (e.n. In 2012, Mexico opened the bridge "Baluarte"  who became the highest bridge in the world. The height is 403 meters, the length - 1124 m).
Key information on the construction of the viaduct is freely available. Explore the 6,000 m² of the outdoor exhibition in the company of an Eiffage guide. (The Jardin des Explorateurs).

Created in 2007, the Course Eiffage du Viaduc de Millau has became an important event in the world of French running. The number of participants grow with each passing year thanks to the excellent media coverage of this unusual competition.
The race is held every year in the penultimate Sunday of May (e.n. 22.05.2016) on route length of 23 km and 700 m., control time 4 hours and following profile:

The French Ministry of Ecology and Transport is authorised with the closure of the motorway for 4 hours. Traffic is therefore stopped between 8am. and 12pm. Three cut-off times are also stipulated:
They are calculated based on the start time of the 4th wave (9:30 am).
Runners who are unable to keep within the cut-off times will be taken to Millau in a shuttle bus.
The race is limited to 15,000 participants. Participants are divided into four main groups according to their capabilities.

The map of the route is fun and unusual as the whole race. 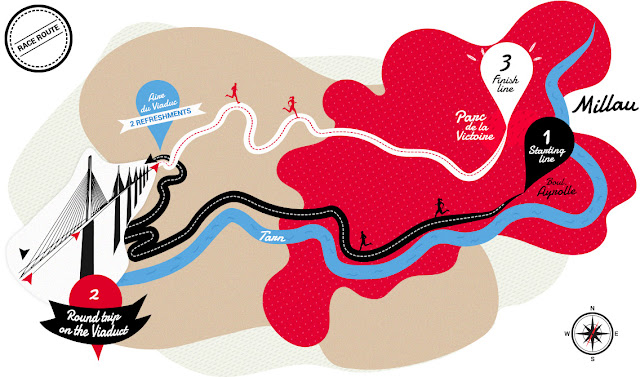 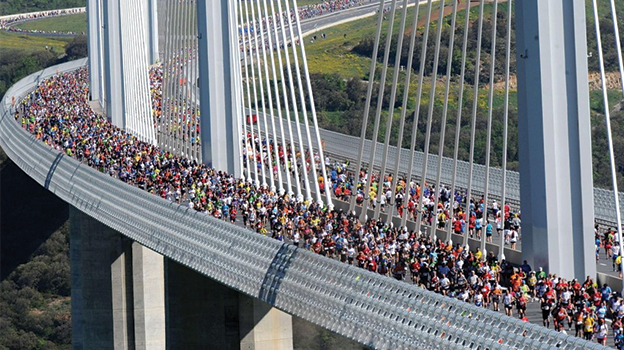 The town of Millau is located in a very special environment. Right in the heart of the park Grands Causses it is surrounded by mountains, limestone plateaus (Causses), lush green valleys and roaring rivers (Tarn, Jonte, Dourbie). It is no coincidence that the oldest 100km Ultra in France takes place right here, every last Saturday of September since 1972.
100 km de Millau is a freestyle competition, i.e. walking is permitted, with a time limit of 24 hours, and attracts about 1000 participants. The hard profile and the setting make it one of the most prestigious races of French Ultramarathon, dubbed "Mecca of 100km." There are two features. First, the route is completely paved road. Second, after the seventh kilometer, you can use un attendant on a bicycle.
On the same day is the start of the Marathon de Millau, so the first 42 kilometers are common to both distances.

The fee for participation in Ultramarathon is €64 and for the Marathon - €39. They are valid for enrollment until 09/01/2016 for this year. The organizers observed very scrupulously the rules spelled out by the French Athletics Federation (F.F.A.) and every runner must submit a medical certificate during proces of registration, which is valid one year from the date of the race.

Out of the races, the small town of Millau offers many possibilities. The combination of 3,000 years of history and natural phenomena makes it attractive to tourists.
What to do in Millau, refer to France Voyage and Virtual Tourist
Публикувано от Unknown в 15:23:00 ч.